The untold story of how bra-making seamstress helped put a man on the moon is an underrated one full of passion and dedication. Their precision craftmanship in making the spacesuit keeps the astronauts safe while giving them the mobility to carry out important duties in the extreme environment of space. 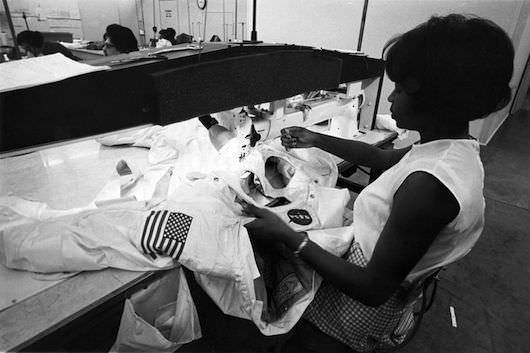 Playtex is a division from International Latex Corporation(ILC), known for making bras and girdles. Despite facing many challenges, Playtex ultimately won the contract against other big defense contractors to make one of NASA’s, most visible and critical pieces of spaceflight equipment - the spacesuit.

Rather than using tin-can-like components like the other contractors, they made accordion-like folds to allow a wider degree of movement in the joint’s areas of a suit such as elbows, shoulders, and knees, solving one of the most challenging problems that other contractors couldn’t. All these due to the extraordinary level of the seamstresses’ skills, craftsmanship and the company’s continuous research and development of textile that employed flexibility.

A woman clad in bra and Playtex panty girdle walking down steps | The Life picture collection. One of their famous debuts was the Playtex Living Girdle. A girdle that stretched all ways, molding to the wearer without the need for custom fitting, seams or rods. 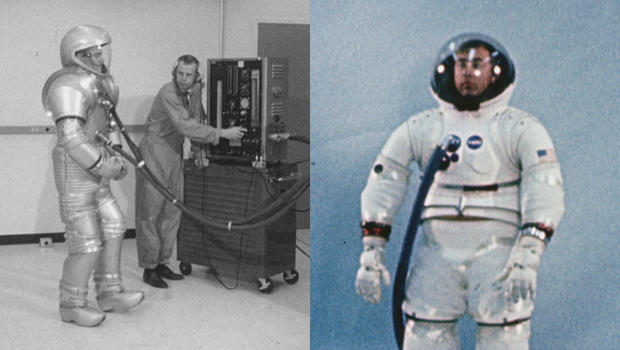 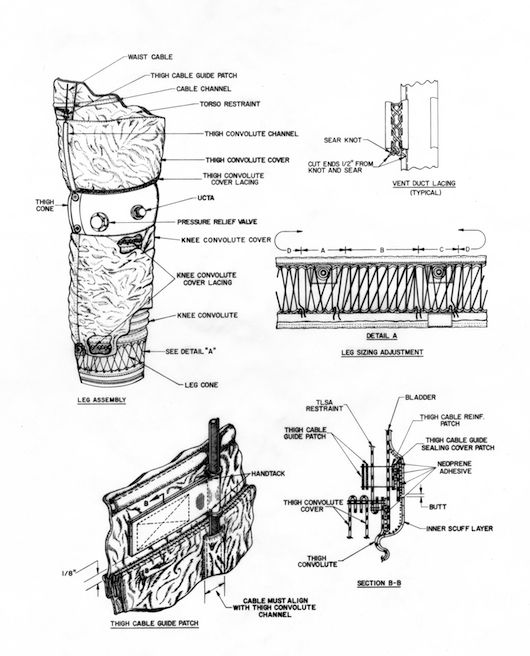 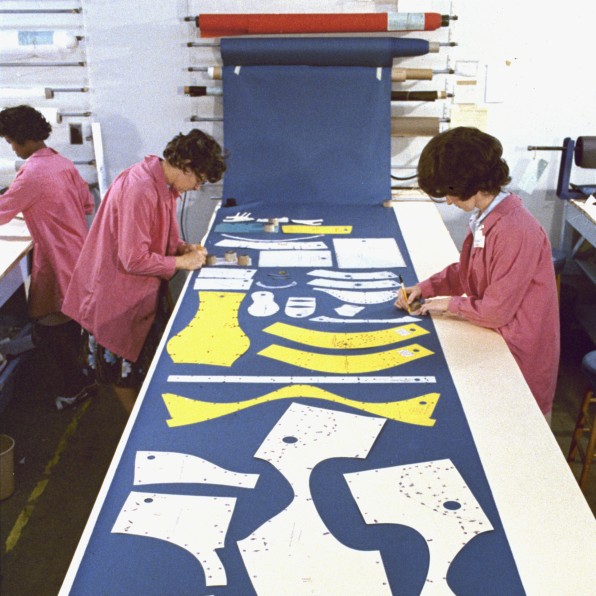 The seamstresses were trained to read blueprints of the spacesuit construction, each specializing in different parts such as the torso, gloves, and boots. They work along with engineers for precision sewing using newly designed threads and multiple delicate layers of fabrics which cost almost $3000 per yard! The 21 layered spacesuit made of synthetics, neoprene rubber, and metalized polyester films were hand sewn by the Playtex seamstress with extraordinarily precise; with only 1/64th of an inch tolerance (that’s 0.396 mm!) Each layer of fabrics serving a specific purpose that would sheathed astronauts from –280ºC in shadow to +240ºC in sun, and hits by micrometeorite hurtling through the void at 10 miles per second. 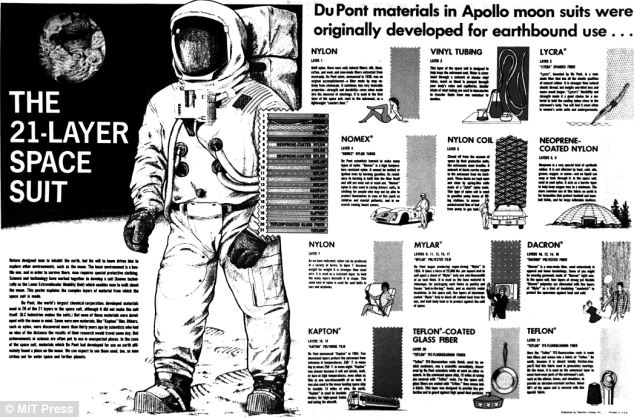 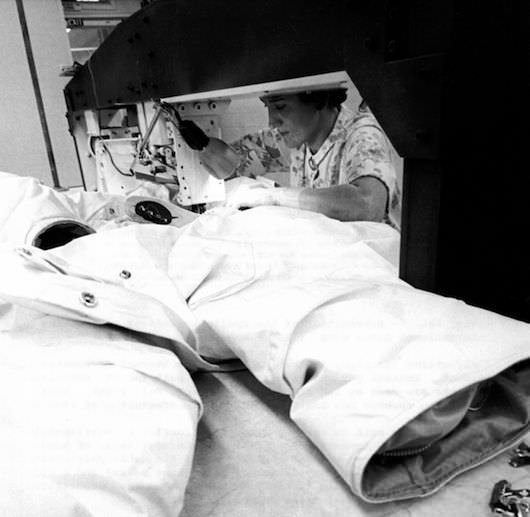 The finished hand-built spacesuits were later taken to a local hospital for its final inspection. They were X-rayed twice to make sure no pins or anything else was left inside. Many nights the seamstresses would go home worried if they left a pin in the suit or made a tiny prick on the fabric that would compromise the spacesuits as it had to be inflated and pressurized from the inside—meaning, thousands of dollars wasted but more importantly someone’s life. This tremendous pressure makes them lose sleep at night. 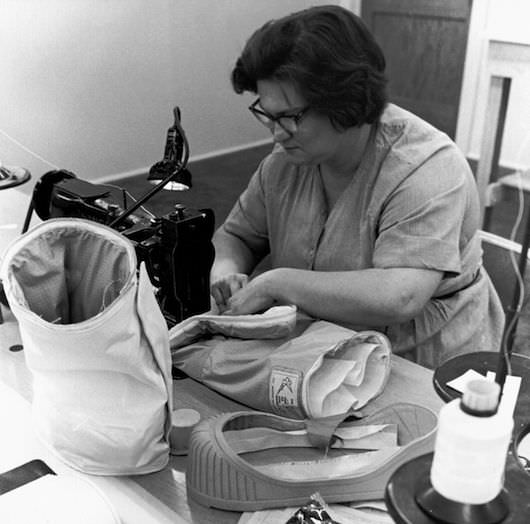 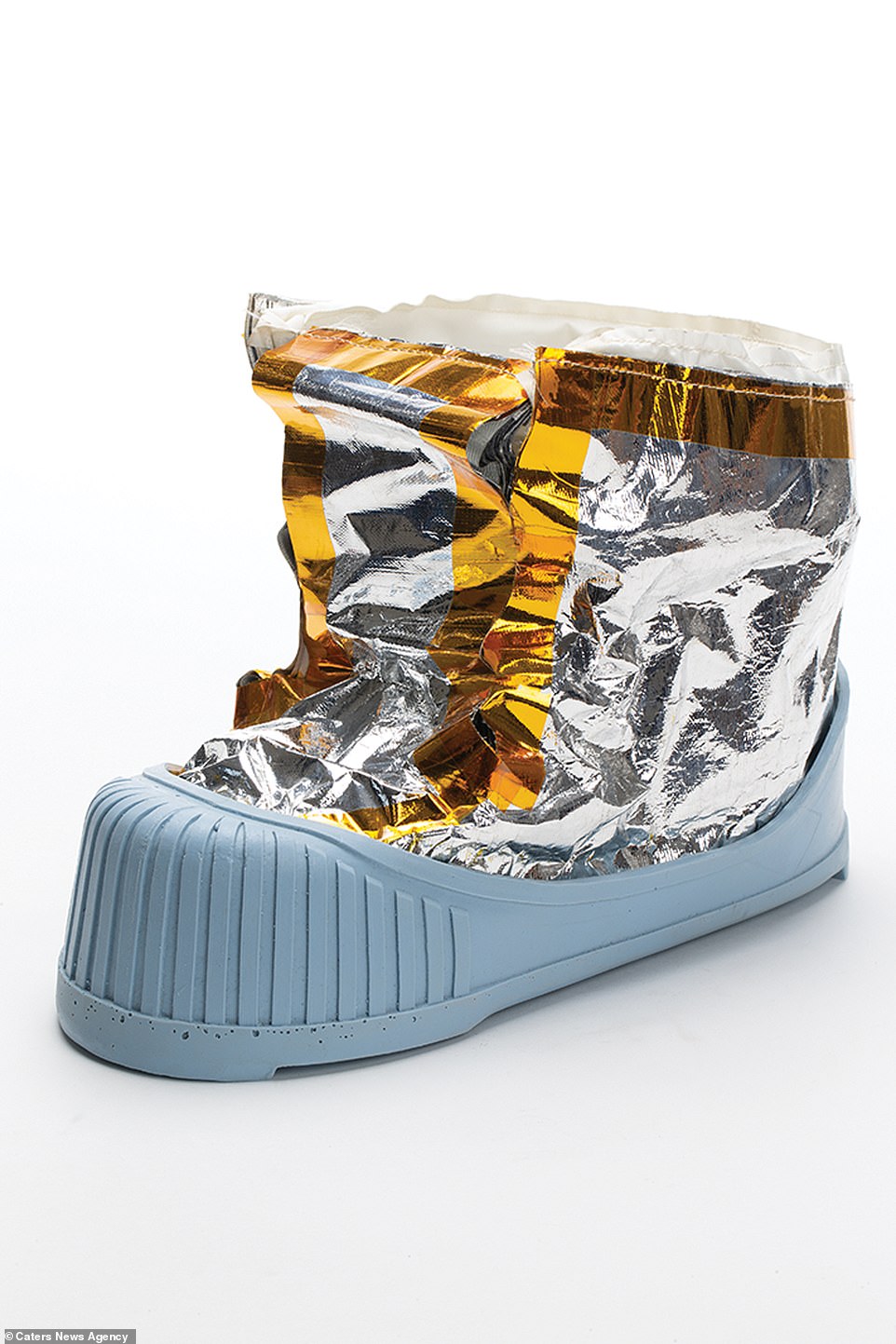 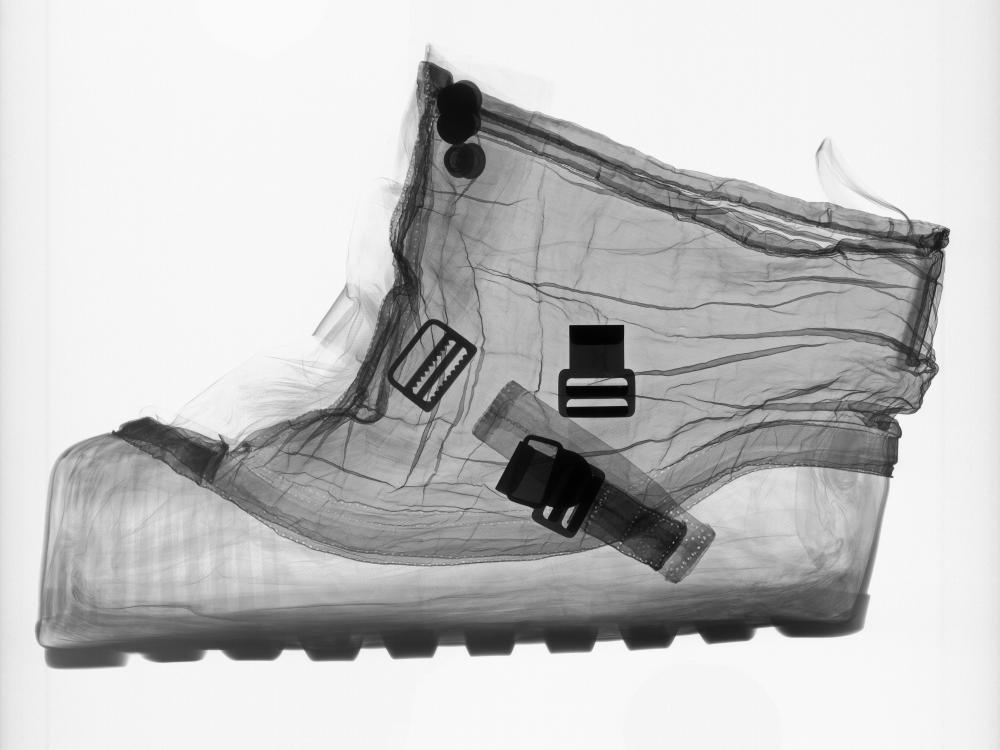 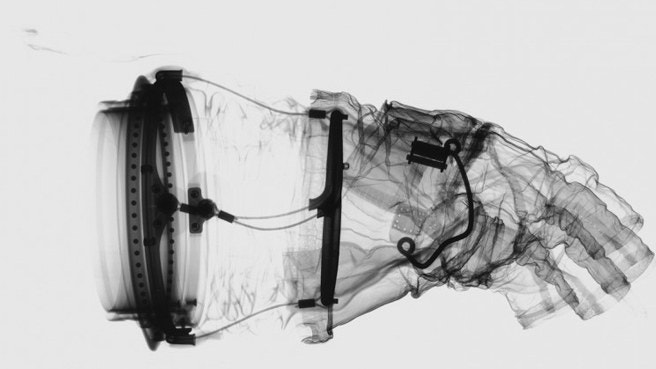 Without the dedication and craftsmanship of these seamstresses in making the spacesuit, Armstrong, the first astronaut on the moon wouldn’t have been able to take that one giant leap for mankind, moving freely to collect the priceless samples of lunar rock and dust; assured that despite only few layers of material separated him from the vacuum and intense temperature in space, it will keep him safe. 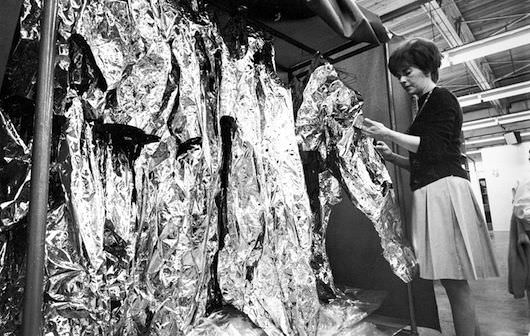 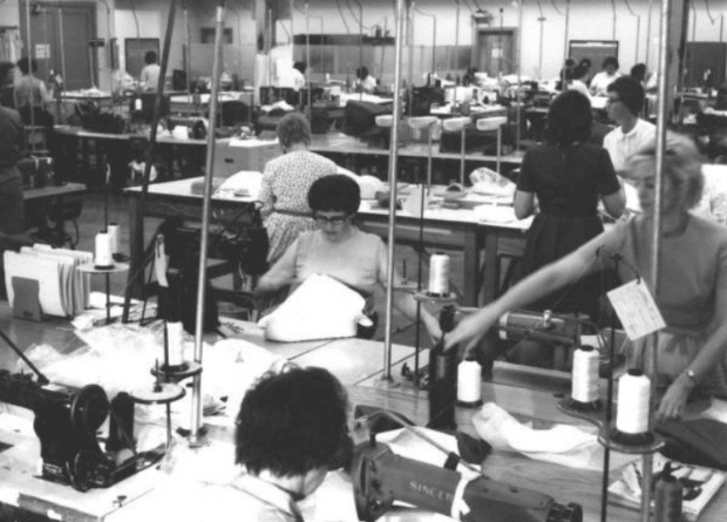 Neil Armstrong leads the Apollo 11 crew to the spacecraft. 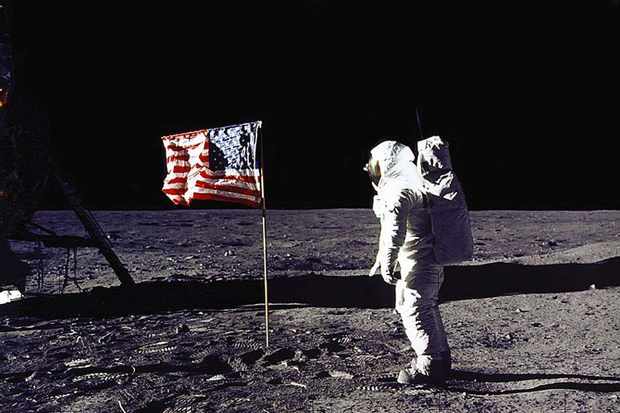 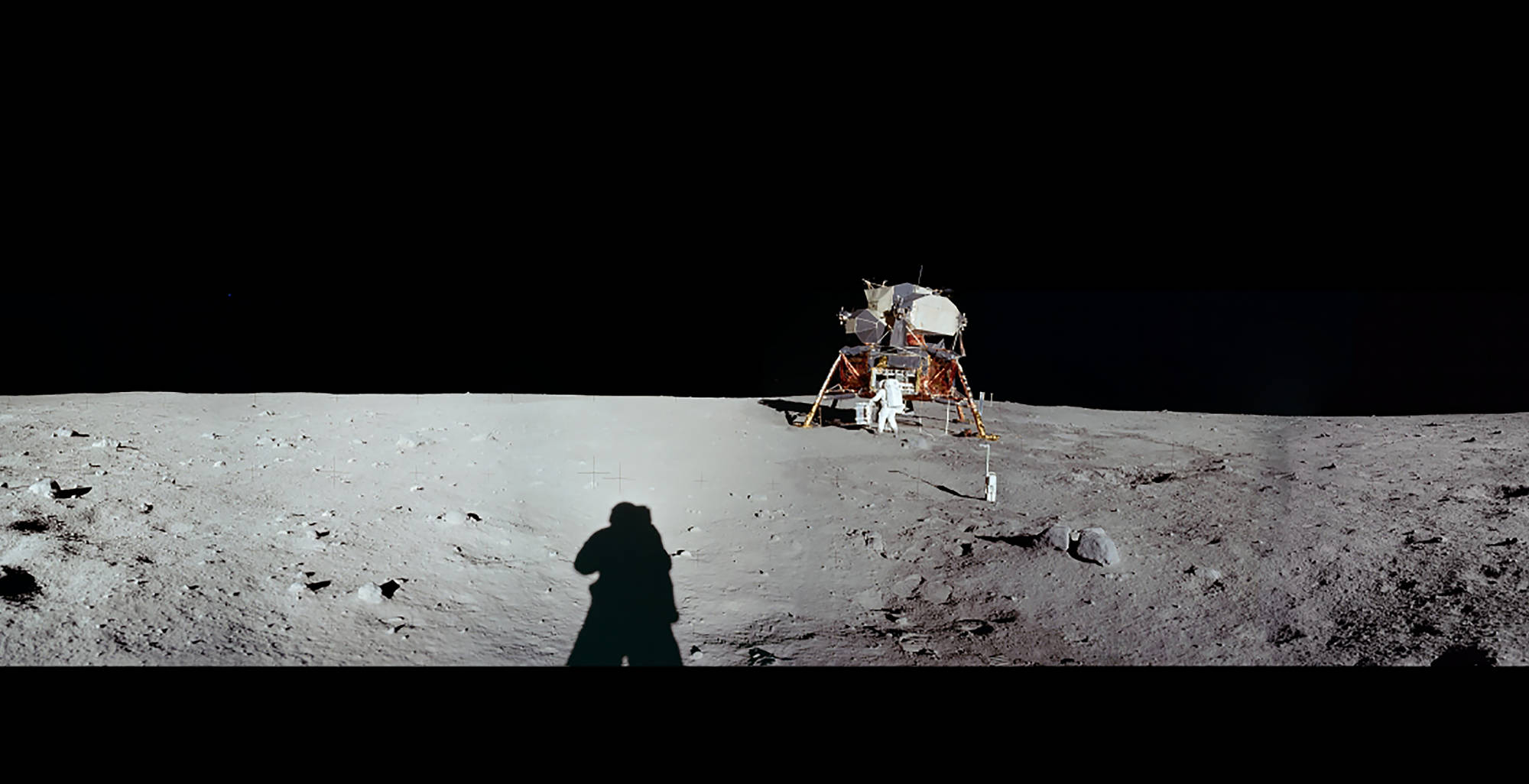 Two female NASA astronauts made space history by completing the first-ever spacewalk by an all-woman team. Though the all-woman spacewalk wasn't something NASA purposefully planned it was bound to happen eventually because of the milestones made by women who paved the way to space. Cosmonaut Sve... 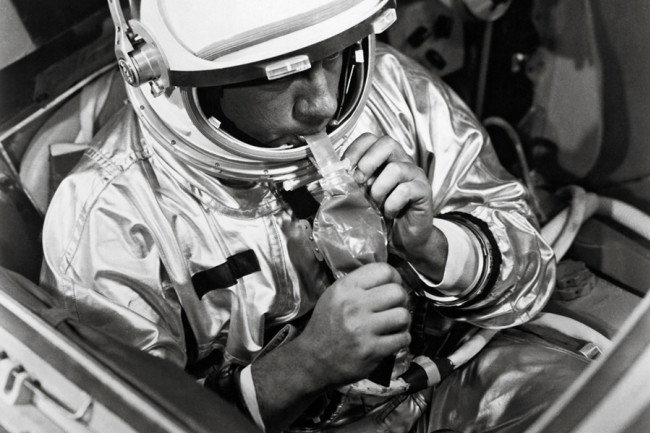 The last time I planned for lunch was probably when the hunger pangs hits, and luckily someone else is doing the cooking of dinner tonight, phew~ During the early mission days, breakfast, lunch, and dinner were planned months in advance right down to the day! The current technology and development h…