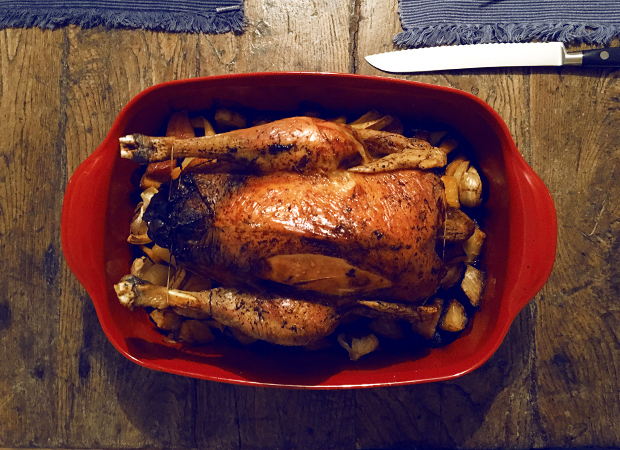 In my eyes, those who choose to cook and serve a bird for a special occasion should know as much as they possibly can about that animal and where it came from. When you’re choosing a roasting bird, we should look at the French who are not only bask in a rich great culinary history, but who also value quality, and the fine art of butchery. I am always so impressed by good butchers who pride themselves on the meat that they purvey as well as the skill in which they hang, butcher, and present said protein. As we slide into a hyper convenient, and very globalised civilisation, people like me long for the specialised skills and produce that remain unique and special to certain places. I do like the idea of flexibility, and locality like how the Aussies do a seafood BBQ on their scorching hot Christmas day rather than being sticklers for the echoes of tradition that call from a very distant Britain. The fact is, when there is beautifully produced local delights to be had, sometimes the experience can be tenfold as opposed to reaching for the frozen turkey that came from the other side of the world in the name of stubbornness.

Let me not side track too far, because this instalment is all about getting familiar with your Christmas Bird if you have decided to delve for it. My recommendation is that you consult your local butcher or even better your bird keeper if you are living in the country. These guys are far more connected to their produce than your hypermarket freezer, and this is super important because we want to know that the bird lived the best life possible, and the resulting nourishment will provide you with the best flavour. Trust me. We have been conditioned to sway towards the artificially plumped up, fatty, textureless, and flavourless bird that lacks nutrition. To be truthful I find these birds disappointing in taste, lacking in character, and any kind of real ‘bird-y’ quality – not to mention the fact that these lives suffered tremendously in their existence.

As I plan my Christmas menu this year, my number of guests helped decide what kind of bird I would choose. Turkeys are fantastic for a huge number of guests, but for those who are four or six, perhaps a smaller variety like a chicken, duck, or pheasant would be more fitting. A spatchcock or pigeon would be ideal for the solo Christmas celebration indeed.

I have selected the creme de la creme, the Bresse chicken, the only chicken in the world to be protected, like a famous wine, by an Apellation d’Origine Controlée (AOC). The first recorded mention of the bird was in 1591, when the good citizens of Bourg-en-Bresse, midway between Lyon and Geneva and not far from the Swiss border, presented the Marquis of Treffort with two dozen of the birds in grateful recognition of his bravery in driving off an army of marauding Savoyard soldiers. Its reputation was assured by 1825, when one of the world’s first and greatest foodies, the 19th-century epicure and gastronome Jean Anthelme Brillat-Savarin, described the bird as “the queen of chickens, and the chicken of kings”.

From about 35 days, the young birds are fed cereals, such as maize and wheat, and milk products – each breeder has his special recipe. What’s different about these birds, though, is that the supplementary feed is kept deliberately short of protein, to make sure they have to continue to forage for insects themselves. I selected mine from the many birds hanging at my local butcher. Here they are completely in-tact, without their feathers from the neck down, and once selected, the butcher carefully burns off its feathers, guts, stuffs, and trusses it ready for roasting.

Here he has demonstrated the process in this time lapse video, and I have taken my incredible bird home and brined it in a solution of salt, bay leaves, and juniper berries in the fridge for 24 hours before the roasting crunch time. Stay tuned for that part, all in perfect time for Christmas day tomorrow !

We all have to start somewhere right? The best excuse for practicing your butchery skills is during the holiday season, somewhere between Thanksgiving and Christmas where you can watch it done once and practice for your turn in December. Like anything, practice makes perfect, and the more chance you get to butcher meat the better.
THIS IS HOW YOU MAKE CURRY GOODNESS !
Give Lauren’s very own recipe for a curried bitter melon dish inspired by her travels through South East Asia.